The entrance to the Cincinnati Recycling and Reuse Center at Price Hill.

Every American can quite possibly recite the “3Rs” of recycling: “Reduce. Reuse. Recycle.” It’s an ubiquitous slogan, accompanied by a now universal logo – three arrows pointing at each other in a cyclical triangle, an ouroboros of waste reduction – and which acts as a set of guiding principles for the environmental movement born in the 1960s and 70s (the Environmental Protection Agency was founded in 1970).The call to adopt all three, as well as to increase consumer education, reached its climax as the Scientists around the world are warning of the growing impacts of climate change and humanity’s role in it.

Locally, the Cincinnati Recycling & Reuse Hub – colloquially known as “the Hub” – aims to help mitigate the effects of climate change, with a mission to “revolutionize the way people think about ‘things’ and provide a place where almost anything can be recycled or reused,” according to their website.

“There are so many consumer-related things that people need to understand better,” says Hub Managing Director Colleen McSwiggin.

McSwiggin is a microbiologist and former chemistry lab director at Mount St. Joseph University. She was also a member of the school’s sustainability committee and led several recycling initiatives there and in the community. She founded the Hub last year with Carrie Harms, one of the creators of ZeroLandfill Cincinnati, a reuse center dedicated to design and architectural samples, which has been absorbed into the new effort. There are now more than a dozen board members who help oversee the nonprofit.

The idea for the Hub grew out of the obvious need for a permanent hub that McSwiggin saw at community electronics recycling events she hosted, particularly one in Oak Hills.

“We had 764 cars on the line in two and a half hours. We completed five semi-finals, and I still had 150 people in line that I had to say, you know, we can’t take your stuff,” she said. “That’s where I got the idea, we need a permanent place, where if we have too many things coming in, we have somewhere to put them until a truck can come back. and get them back.”

The Hub opened at 911 Evans St. in Price Hill on April 1 of last year.

Since then, McSwiggin says they’ve helped divert 133 tonnes of waste from landfills.

“We [diverted] 65 tons of electronics, seven semi-loads of polystyrene, three tons of batteries and bulbs, 17 tons of plastic that couldn’t go to Rumpke recycling,” she says. “[We’ve had] 16 tons of things that have been salvaged for reuse. That includes plants, pots, polystyrene… and that includes shoes. The ZeroLandfill is a separate total. And I know we had over 18 tons of that – the tile and fabric swatches and all that stuff – out. So that’s a lot.

When the Hub says it can reuse or recycle almost anything, it means it. But McSwiggin says residents should always start by recycling whatever they can with Rumpke, which provides most of the sidewalk services in the area.

Then they can turn to the Hub, which accepts everything from plastics, packaging materials and Styrofoam to items you never thought could be recycled, including caps, lens packaging contacts, glue sticks, empty toothpaste tubes, Brita water filters, scissors, markers, fishing lines, used Swiffer pads and even silica packets – those little white desiccant envelopes that come in various packaging with the warning “do not eat”.

“It was a weird thing that I didn’t know anything about,” McSwiggin says. “We were literally open for a week and one of our volunteers came over and said, hey, can you start collecting them for me? And we think, OK, what is that for? He’s a spelunker – a spelunker – and they have, like, little stashes in the cave systems of emergency food… They’ll take a handful of silica packets, throw it in with that emergency stash and have little emergency backups if the water rises and they can’t get out or someone gets hurt and can’t get out.

Many things can be recycled for free, but some items, including electronics, electronic media (CD DVDs, VHS, tapes), light bulbs, tires, batteries, cell phones, smoke detectors, and helmets bicycles cost recycling fees because they must be sent to specific establishments. Recycling fees for each item are based on what Hub partners charge. Currently, small items like batteries cost about $2 per pound to recycle, while large electronics like televisions cost up to $35.

Items can be dropped off for reuse or recycling when the Hub is open. Customers enter through the “mini Hub” downstairs and can sort their items into labeled bins.

“Our mantra is ‘everything must be clean and dry’,” says McSwiggin.

The Hub then sends items to various partners. McSwiggin – who also goes by the moniker “Chief Recycler” – is something of a waste whisperer when it comes to finding homes for hard-to-recycle items. For example, school supplies go to Crayons to Computers, shoes go to Soles4Souls, denim goes to Blue Jeans Go Green, working glasses go to Lions Club, and non-working ones go to Luxottica and LensCrafters to be shredded and transformed. in new glasses.

The Hub also works with TerraCycle and two outlets in Indiana, one that takes plastics and polystyrene that cannot be recycled by Rumpke and one that takes packaging like bubble wrap and air cushions. .

Home recycling options are new and growing rapidly, McSwiggin says. Previously, much of America’s trash and recycling would have been shipped overseas, until “China finally shut down in 2018 and sort of said, we’re not taking the world’s trash anymore,” says -she. “That’s when the technology really started to ramp up here in the United States.”

This all adds up to the forward momentum the Hub is pushing for, specifically, as McSwiggin puts it, “we’re slowing down that clock on climate change.”

“One of the biggest issues – and we try not to get into it too much, unfortunately, because it’s a political issue at this point, or at least some people claim – [is] we are really all concerned that climate change is going to affect the earth and not for the better. The United Nations [climate change report] basically said that 2030 is the turning point. And by breakthrough, we don’t mean there will be an apocalypse in 2030; we mean the systems of the earth will be broken,” she says.

“We’re trying to do everything we can to reduce the amount of greenhouse gases in the atmosphere, and that has to be done in a lot of different ways. The way we deal with it is to make sure we don’t we don’t need new materials to make new things and to make people understand that what they have, when they throw something away, it doesn’t go away – it has to go somewhere. it doesn’t stay in a landfill. If we can recycle this, chances are the recycled resources will be far less than what was needed to create a new item in the first place. But we’re really kind of a stopgap solution. . 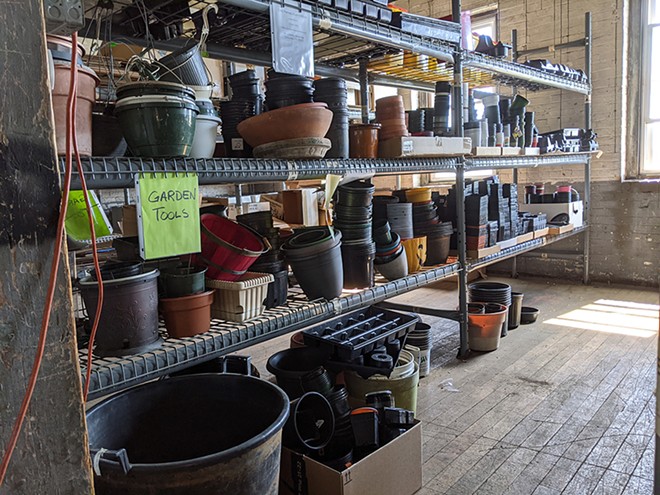 Gardening supplies ready to be recycled at the Cincinnati Recycling and Reuse Center in Price Hill.

McSwiggin says the idea is to make people aware of all the resources needed to provide them with products, mentioning that even just recycling cell phones could reduce the need for coltan mining (a mineral used in smartphones) by Democratic Republic of Congo. , decreasing gorilla habitat loss and worker exploitation.

The Hub received a $25,000 grant earlier this year from State Farm to help them expand their mission — and reach — beyond the Price Hill center. The funds will be used to establish partnerships with schools and local businesses in the area to create new recycling collection points.

“We want to have collection sites in literally every school, restaurant [and] businesses to collect things that are in their waste stream, that could be recycled, that don’t have to go to landfill,” says McSwiggin. “And then we would pick it up.”

The Hub already has collection agreements with schools such as Seven Hills, Forest Hills and Wyoming High School, as well as senior communities such as Ohio Living Llanfair and Maple Knoll Village, and a shipping storage company. There’s even a condo association in College Hill that has written a grant to create its own Hub collection site.

And it’s an effort that McSwiggin sees happening in every community.

“A lot of people have kind of already taken it upon themselves to be the go-to person for their neighborhood,” she says. “There are people who say, hey, if you have some stuff, bring it to my garage, put it there and I’ll take it all apart.”

“So many people see that the world is so disposable and I think the Hub is a perfect example of if people know there are ways to do it, they will come – it’s kind of like Field of Dreams,” says McSwiggin. “I can’t tell you how many people have passed by and when they see oh, my God, you can take such and such, and, oh my God, you can take that. Yes, and that’s why we’re here, because we want people to realize that just going to the landfill isn’t enough.

The Hub is hosting a fundraiser called HUB-toberfest from 11 a.m. to 2 p.m. on September 18. It will be held at the warehouse and will include tours, food trucks, beer, a DJ, silent auction and crafts. The suggested donation amount is $5. The event is part of The Hub’s fundraiser, which runs until October 22.